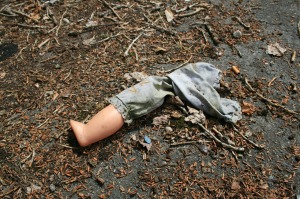 This is the first installment in The Story of Hanna

I’m still feeling a bit wobbly following my surgery this summer. It was unexpected, it was rough, and it happened without the benefit of anesthesia. I lost an important part of myself, and my wounds have not yet closed. As a counselor, I’m always helping others deal with enmeshment and individuation. I get this stuff. I was surprised at some things I learned when I had to look in the mirror.

“I knew as soon as I saw your hair and clothes.” Hanna had said, unable to fully articulate what had begun to go wrong between us the moment she and her husband arrived from Germany for a month-long visit. This was their first visit in five years. I had finished my graduate work and taken a job in my field. I wasn’t sure what taboo I had broken. What had I done to trigger such feelings of loss and betrayal?

Hanna and I met when we were assigned to the same fifth grade class in XCity, Germany. We were classmates for four years before I returned to the U.S. I was the pig-tailed American girl with the Ranger Rick backpack and the bad John Denver habit. She was the quiet, white-haired kid who wore traditional leather pants and carried a pocket knife. I thought she was a boy. It wasn’t until our early teens that our best-friendship became firmly cemented.

By ninth grade, Hanna had become a star athlete and a Beauty. Her looks and effortless air of mystery caused boys to pine and become irrational in her presence. I, on the other hand, had followed my family blueprint to become a gangly, pimple-faced Nerd. In my presence, boys experienced…nothing. They didn’t notice I was alive unless they needed help with their homework.

Steadfast through the decades, we visited back and forth and were in frequent touch in between. Despite our outward differences and our geographic separation, we were, as Hanna’s father often joked, “ein Kopf und ein Arsch.” A head and a tail. A single creature. Though he meant to tease us, he had hit upon the truth: We were so close that we hardly knew where she ended and I began.

Hanna and I understood one another intuitively and profoundly. Our enmeshment worked unbelievably well. In fact, I believe it saved us from childhoods which could have undone us.

Hanna came from a family in which feelings were poorly tolerated. She grew up without hearing the words, “I love you”; and when she showed emotion, she was criticized as mentally unstable and threatened with boarding school. Invalidated and undervalued, she could easily have gone for broke and self destructed.

My family was equally dysfunctional. We were just as well versed in passive aggression but it was located within a larger arsenal of weapons intended to help us bite and scratch ourselves to the top of the family heap. Punishment came frequently and unpredictably, and nobody wanted to be the one in the crosshairs when Dad was in one of his moods. I became observant and stoic. I distrusted and ignored my own feelings. I could easily have gone on to become an abuser or else continued to withdraw until I lost touch with myself altogether.

I know Hanna’s love and support made me more resilient and allowed me to hold my head a little higher. I conjured her presence to help me when I felt clumsy shopping for clothes, and I imagined myself in her skin to give myself the courage to take risks. I later learned that she had carried me in her heart in much the same way. Admiring my dispassion and logic, she imitated me when she needed to think her way through difficulties without becoming overwhelmed by her emotions.

Our outward experiences were always very different. I was a goody-goody; she experimented. I accepted Christ; she remained skeptical. I went to college and became an athlete at about the same time she retired from athletics and moved to a small town to apprentice as a goldsmith. I dated little, married young, and couldn’t wait to have babies. She traveled the world and dated a series of colorful characters. Nevertheless, we always shared intimately and without judgment.

We each made an important decision around the year we turned 40. I returned to school to pursue my M.S. in Pastoral Counseling. After making progress towards an undergraduate degree in Psychology, Hanna dropped out of college to become partner to a man with a serious and chronic health condition. We did not realize that the cord which had kept us connected for so long was about to fray.

My grad school experience was arduous and protracted. Family responsibilities resulted in my taking over six years to finish; but stretching out the timeline had gifted me with the opportunity to deeply contemplate and assimilate the material. The program required more of me than the memorization of facts and the writing of research papers. I was challenged at every turn to reflect with honesty upon my faith and my life, past and present. I experienced anger and sadness, joy and gratitude as God used this time as the crucible for a work of healing and enormous growth.

Somewhere along the way, I grew my own head, heart, and lungs without even realizing it. My brain thinks clearly, my heart beats confidently, and my soul expands with every breath. I love Hanna, and I want her friendship just as much as I always have. I simply no longer require her. In time, I believe I will be able to feel the profound beauty of this truth.

The wait is painful and uncertain.

To follow this thread, please click on the tab for The Story of Hanna or find second installment here.