RSS Feed
← Awakening
Rule # 11: Logic Rules (unless we are talking about me) →

April Fool and Beyond 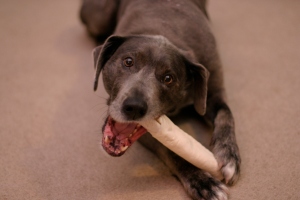 My family loved dogs. We even involved them in our pranks.

One year while my family was having dinner at my mother’s house, the conversation drifted to the topic of her Chihuahua. Bella made it her habit to camp out under the table so as not to miss any falling goodies.

Bella was a licker. She was the smartest and most affectionate little dog, and this was how she showed love. Given the chance, Bella would more or less bathe you. Having grown up around dogs, this had never bothered me. In fact, it was kind of comforting.

Come to think of it, I could feel her starting on my right foot. How sweet! It was as if she had known I was talking about her.

I bent down to peek under the tablecloth only to see one daughter’s tiny face grinning back. I screamed without thinking and nearly fell backwards out of my chair. Victory!

Another time at that same table, I switched a different daughter’s eggroll for a rolled up piece of basted rawhide. It took her a few minutes of perplexity before she gave up with a scowl. Meanwhile, the rest of us were fighting back snorts. She was about as outraged as a four year old could be.

And so it goes. Some of the most embarrassing moments provide some of the best laughs later.

In keeping with the canine theme, I want to admit to you that not all of my tricks were so nice. Of course I chased my tail, begged, and rolled over. Those performances were expected and rewarded. But when the leash was off, I growled, menaced,  and bit. I fed Kendra Patrick cubes of Camay soap dipped in dark chocolate. I dumped a spade full of gravel into the mouth of my trusting sister after an inviting sing-song intro: “Close your eyes and open your mouth…” There were so many nasties over the years. So many.

Who was the fool here?

After many years of returning to my own vomit, I made a decision. If I’m going to be a fool, I’m going to go for broke. I’d rather be a Fool than a Bitch.

I have given my life to Christ, and He is slowly reforming my shit-eating ways. I will be a fool for Him.

For the message of the cross is foolishness to those who are perishing, but to us who are being saved it is the power of God. (I Corinthians 1:18, NIV)

This is how I want to live—unashamed of the Gospel.

For I am not ashamed of the gospel, because it is the power of God that brings salvation to everyone who believes: first to the Jew, then to the Gentile. (Romans 1:18, NIV )

This is no joke.