Dog Knows, Things Ain’t What They Used to Be: A Wandering Essay on Physical Fitness, Sex, & Wilted Produce 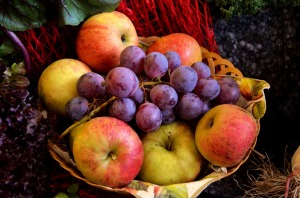 Things were better when I was younger…well, my things were, anyway!   –Maxine
(Maxine was created by John Wagner for Hallmark)

I was born with endurance and a great bottom half. From jump roping to pogo sticking to sibling kicking, my legs spelled power and possibility from an early age. Plus, they provided a great diversion from some of my weaker features. Dad always said my ears stuck out too far and that I had a bit of a chicken breast. Well, now that I’ve reached middle age, my arms are starting to resemble chicken wings. It looks like I’m getting the neck to match.

In elementary school, I was all about my banana bike. I got it the winter I turned 9. I was in heaven! But when the weather turned warm, and my younger sister learned to ride, Mom and Dad turned on me and granted my younger sister Gwen equal ownership.

Possession is nine tenths of the law, so I always made sure I got to the bike first. I’d peal out, legs treadling as if possessed, and leave Gwen flailing at the end of the driveway. I stayed away for as long as I dared. Sometimes I sneaked up to the shopping center to spend my pocket change on candy. I returned when the needle on my Spankometer indicated I was about to move from “Trouble” to “Big Trouble.” I often miscalculated. Between the Now & Laters and my Dad’s belt, I’m surprised I have a tooth left in my head and a hiney left to sit on.

I discovered another level of freedom at age 10 when we spent a few years in a good-sized German city. My bouncing stride propelled me to destinations of my choosing under my own steam and on my own terms. The city was very safe back then—both day and night. I needed no car. I needed no parents. I felt powerful knowing I could walk out my front door and take myself anywhere in the world. My adventures were limited only by my porte-monnaie and my own daring. Would it surprise you to learn that a good number of adventures involved eggs, tomatoes, toilet paper and my buddy Michaela? I ran faster, thank God. I hear she is doing hard time.

In 10th grade, I discovered cross country and track. Talk about a rush! I became a competitive athlete, and these very legs secured me lifelong friends, a million road trips, and two bachelors degrees. Ask me about my bunions another day.

If my physical activity was consistent, so were its fruits. Ripe, firm fruits, I might be persuaded to add–if I weren’t so humble.

One aunt liked taking me out to shop for clothing because, she said, my booty was SO. DARN. CUTE. Back in the days when I lived close enough to walk to our annual Renaissance Fair, a fellow I met there—a friend of a friend–raved about my tights-clad legs. Even my best friend, an athlete herself, coined a phrase to describe my awesome bottom. Happily, the passage of time and the dawning of political correctness prevent me from disclosing it here. My sister Gwen was content to call it my “buttflower” but, hey, what are sisters for?

Ok, ok. I admit that these occasions of bum worship occurred while I was in my teens and early twenties; however, I have it on good authority that even if I don’t exactly have “It,” I still have something. You noticed too? Oh, stop! You are making me blush!

So, the fruits have been predictable. The same can be said for the nuts. By this, I mean the males of our species, who feel compelled to demonstrate their machismo by ogling even those women whose AARP applications are stamped and sitting on the kitchen table.

I haven’t run in decades but they haven’t noticed. For years upon years, my walks have exposed me to the same primitive mating ritual. I used to find it frightening. Years later, I found it enraging. And then annoying. Now I just find it pathetic. My assets are holding up pretty well, butt….Get a life, guys! Get some glasses!

(Car approaches from behind, slowing.)

(Head cranes out window to take a closer look.)

This February, after much cajoling and an astonishingly professional and well-researched PowerPoint, our youngest daughter convinced us that so much undiluted time spent in the company of The Old People might get her down since both sisters are away at college. We caved and allowed her to adopt a rescue greyhound. Trident is striking! He is slender, white, and aristocratically graceful.

We had a break in the weather today. Trident and I, the two retired racers, set out on a long ramble down the bike path which runs alongside the highway.

And wouldn’t you know it…

(Car approaches from behind, slowing).

(Head cranes out window to take a closer look.)